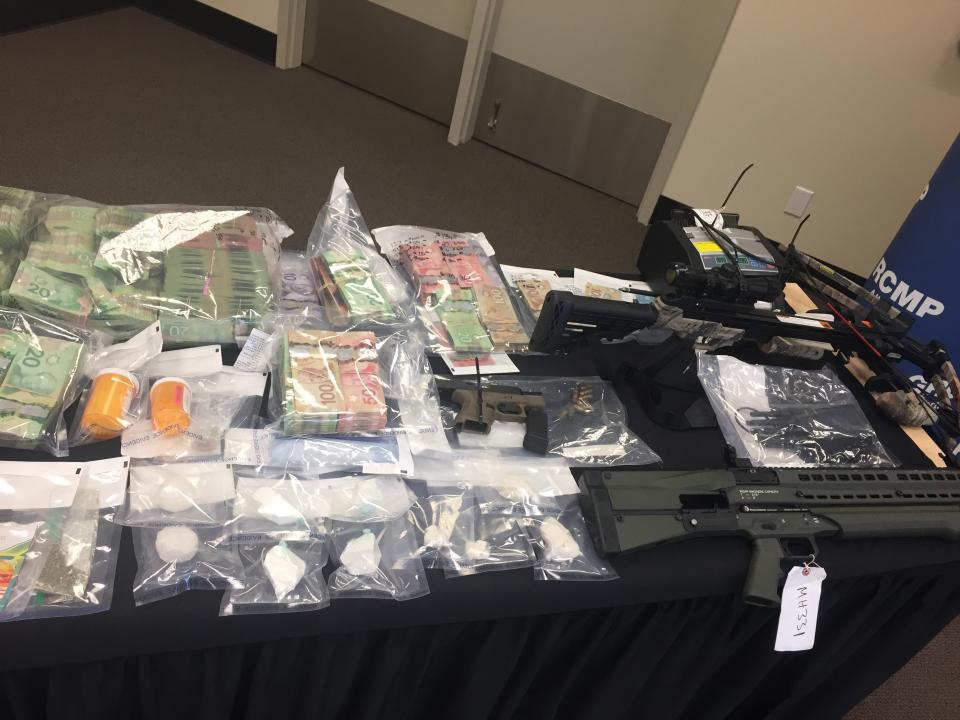 In the course of this search, RCMP seized a large amount of drugs, drug trafficking paraphernalia as well as a loaded handgun, a loaded shotgun, two Edmonton Police Service (EPS) vests, ammunition, an operational signal jammer. In addition, police seized approximately $442,875 in cash which is the biggest cash bust for the Strathcona County RCMP Drug Unit (see attached sheet for a product list).

The EPS body armour and tactical vest were determined to be stolen from Edmonton on August 3, 2017.

Two children ages 6 and 10 were living at the residence in Leduc County where loaded and accessible firearms were present.

William Steven WHITEFORD, age 34 of Leduc and Kala Julian DIEHL, age 30 of Leduc have been charged with:

WHITEFORD has been charged with 13 additional offences in relation to this matter.

WHITEFORD has been remanded and is scheduled to appear in Sherwood Park Provincial Court on Wednesday February 7, 2018 at 9:30 a.m.

DIEHL has been released on a recognizance and is scheduled to appear in Sherwood Park Provincial Court on Wednesday February 7, 2018 at 9:30 a.m.

Jadon Jason SAXTON, age 25 of Fort Saskatchewan area has been charged with four counts of possession of a controlled substance for the purpose of trafficking. SAXTON was released on a Promise to Appear and is scheduled to appear in Sherwood Park Provincial Court on Wednesday March 7, 2018 at 9:30 a.m.

A successful ‘wrap-around’ Crime Reduction approach depends on successful partnerships with various provincial and municipal government partners amongst others such as other policing agencies, health and mental health institutions and non-governmental organizations.

If you have any information about this, or any other crime, please call the Strathcona County RCMP at (780) 467-7741, or call your local police detachment. If you want to remain anonymous, you can contact Crime Stoppers by phone at 1-800-222-8477 (TIPS) or by internet at www.tipsubmit.com or by SMS (check your local Crime Stoppers www.crimestoppers.ab.ca for instructions).